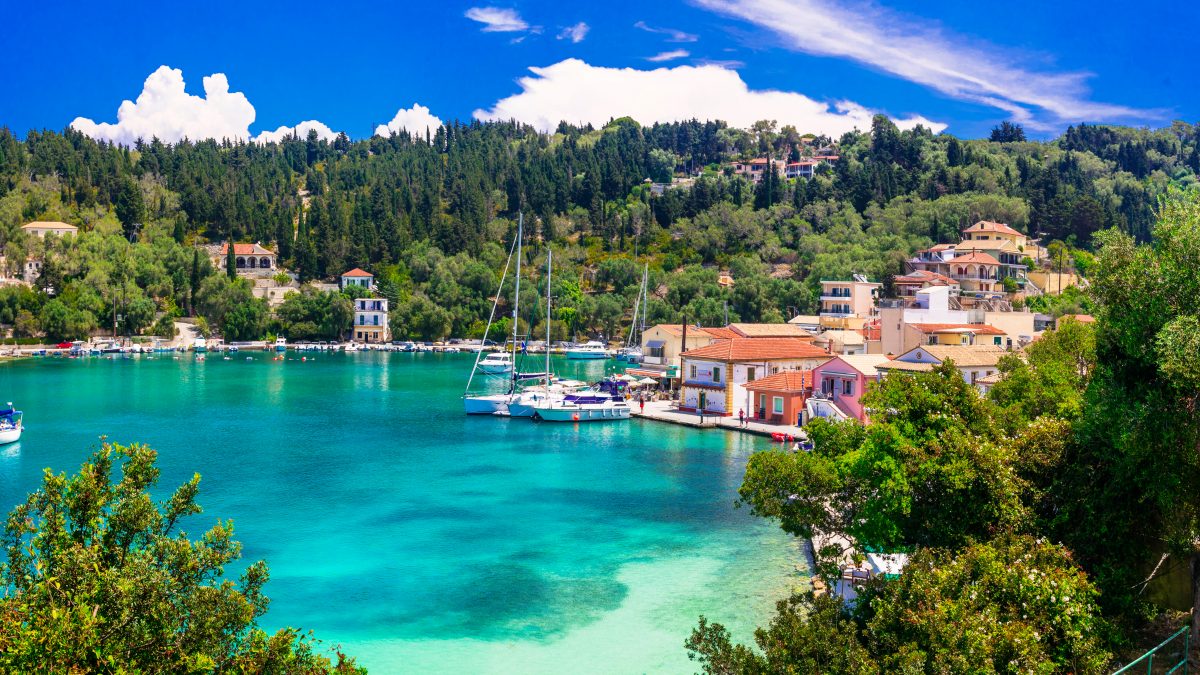 Welcome to the the romantic hideaway of the god Poseidon! A verdant island with turquoise waters, picturesque villages, imposing cliffs sheltering littoral caves and fantastic beaches!

The island at first sight

Welcome to the romantic hideaway of the god Poseidon! A verdant island with turquoise waters, picturesque villages, imposing cliffs sheltering littoral caves and fantastic beaches! Paxi, the smallest of the Ionian Islands, is located seven nautical miles south of Corfu and 12 nautical miles distant from the mainland town of Parga.

The capital of Paxos island is Gaios, an attractive port naturally protected by the two islets of Panagia and Agios Nikolaos, giving the resemblance of a Norwegian fjord. Olive groves and cypresses predominate on Paxos. On Antipaxos, there are vineyards producing exceptional red wine and the renowned exotic beaches Vrika and Voutoumi. With their astonishing natural beauty, these two islands will make a lasting impression!

The outstanding beauty of Paxos is the main attraction for thousands of visitors. The island is considered one of the most cosmopolitan islands in Greece. It offers lush green countryside, enchanting beaches and quaint villages ideal for romantic strolls, as well as traditional Greek hospitality and entertainment in the bars and taverns of the island’s resorts.

The island’s road network is fairly well developed, with the majority of the main roads being tarmac. The island has two petrol stations.

Bus services cater for most of the visitors’ needs. Furthermore, there are plenty of taxis based in Gaios and Lakka.

Small boats depart from Gaios either for the beautiful beaches of Voutoumi and Vrika on Antipaxos or for tours of the island where they stop for a swim at the littoral caves found on the western side of the island.

Paxos, the verdant Ionian island and its surrounding islets and Antipaxos with its blue sea and enchanting beaches make the island ideal for the dream holiday.

Paxoi, the smallest of the Heptanese, is a group of small islands and skerries. The biggest of which are Paxos and Antipaxos. They are located seven nautical miles to the south of Corfu island and eight nautical miles of the Greek mainland, 12 nautical miles from Parga.

Many versions exist regarding the etymology of the name Paxoi. According to the ancient Greek geographer Strabo, the name Paxoi originates from the Phoenician word πακς (paks), trapezium, meaning an island in the shape of a trapezium.

Another version claims that a group of inhabitants from the region of Paxountos in Sicily, either out of need or due to partisan raids, left their homeland and settled in Paxos, giving it the name of their motherland.

The Metropolitan of Paramythia, Athenagoras, states that name derives from the land for flagstones quarried on the island for export, Paxi being a composite noun meaning the island of the flagstones, formed from παξ, (paks), flagstone, and αι (ai) or αε (ae), island.

Moustoxidis considers that the island’s name comes from the adjective πακτός (paktos), the Doric for dense.

“The Thesaurus of the Greek Language” by Errikos Stefanos gives the etymology of the name from πήξω (pekso), the future form of the Ancient Greek verb πηγνύω (pegnyo).

Another possibility is that the name stems from the phrase πακσώσας θύρας, (paksosas thiras) meaning closed gates and referring to the naturally enclosed harbour of Gaios.

Finally, Giannis Doikas believes that the Latin word pax, peace, is one that is perfectly suited to the peaceful island of Paxos.